Attacking that backhand is what tennis is mostly about.

One could easily describe the sequences of motion to achieve anticipated results, but what players simply evolved to do what the situation requires – a particular solution, that’s the better coach.

On the court aggressive play is an essential winning natural trait for fortunate youth playing with skill equal to their physical bloom.

The desire to rush to the ball and execute a winning point sometimes precedes their feet – often a ball driven into the net!

Coaches call that “pushing.” Players “push” the racket away from their body as they move quickly to the ball.  Failing a foundational foot set and never involving core rotation.

It’s a difficult challenge because the aggression – while valuable – shouldn’t be fouled.  Timing and patience must be learned.

One can see the trait develop in the very young player who over run any high ball and find themselves unable to reach the bounced high ball.

Get to the ball set your feet and only then play the ball. 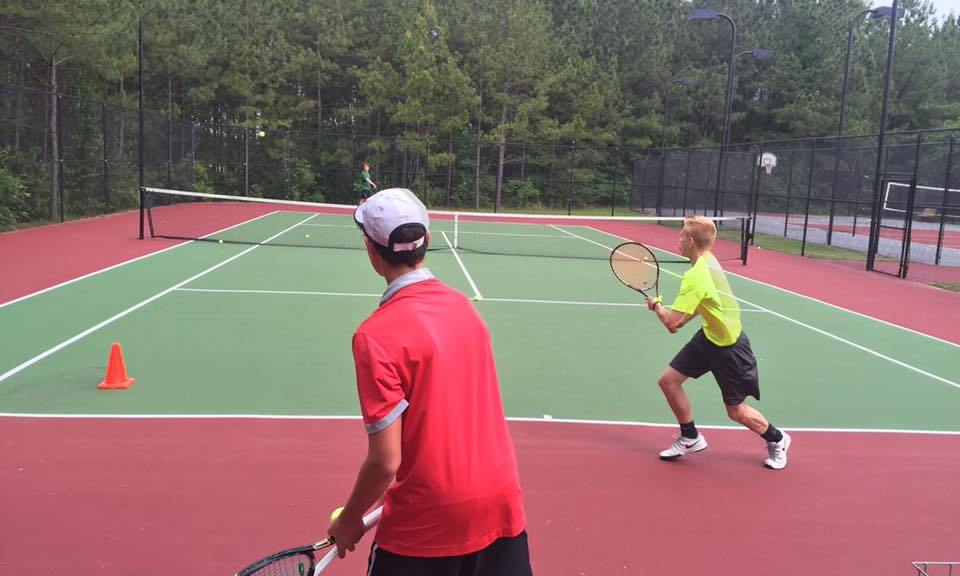 Learn and train to set up shots early.  Successful competition even against a superior player is absolutely achievable!

Recreational League play is the best!

The ball is merely the object about which we compete.

Look intensely as it approaches and contacts your strings, but not beyond that. Instead focus your attention on your opponent and how their body is positioned and how their feet and racket are moving as they field your return. You’ll pick up the ball much sooner.

Many players make a simple mistake that costs them points and sets.

Players will watch their departing balls course to their opponent’s racket and then are surprised by the return pace, especially when fielding a change-of-pace half volley return. The moment the ball leaves you look beyond the net and departing ball to your opponent.

Many players hit a rising ball to rush their opponent – especially effective to those whose stare their own balls down.  Players who look too long at a departing ball are also the ones who fail to recover and find themselves two steps out of position defending the returning ball.

When the ball approaches you train your eyes to also recognize your opponent’s position and movement. Look myopically at the approaching ball but also peripherally at your opponent.

Your body will do what your mind does direct.

If your mind thinks in the negative then your body doesn’t know how to achieve the positive.

Positive can be learned – sometimes after a thousand failures.

You’ve heard to “play a rising ball,” or at least one at the top of its trajectory. It stresses your opponent accelerating the pace of play.

One of the few plays that is an exception to this rule of thumb is fielding of the lob, which is a falling ball. Hit as a redirected motion and back into the lofty air, it is the easiest and most productive shot as players learning the the lob realize.

It’s almost impossible to hit a high overhead backhand with any authority, let alone lob it into the opponent’s empty backhand court. Intermediate players develop the swat shot and do so with great success, but that is an advanced skill in tennis and even they cannot dependably lob from that position.

Recoiled knees, a rising racket up from the ankles, and follow through lofts the FALLING BALL as a lob.

Footwork fundamentals make for winning… kinda obvious but always an effort even in recreational tennis.

“..Get TO the ball and you can play the ball..” Do that and you begin to think about your opponent – their position – and direction of their movement and how to play the ball to your advantage.

If you are struggling to get  your feet set to address the ball – and your thoughts are close in and on your side of the net…as far away from the opponent as possible with myopic tunnel vision … well you’re then losing.

TENNIS is a game played with friends.

Always get yourself involved in the community of tennis from neighborhood court to club play, never stop.

Something magical about the inertia that is only experienced in doubles play. It seems every player has a different ball yet all share a standard of physics & fun.